The Ombudsman, Ms Connie Lau, today (July 12) released to the public the latest issue of her Annual Report.  The Annual Report noted that inadequate coordination and compartmental mentality among Government departments had caused some problems in public administration to persist for years.  The Report highlighted also the need for some departments to enhance their understanding of the meaning and requirements of the Code on Access to Information (“the Code”).  Meanwhile, the Office of The Ombudsman has continued with its efforts in promoting the use of mediation in complaint handling.

Ms Lau said, “In the course of our investigation, we have noticed that where solving a problem requires the input of more than one department, inadequate coordination is found among departments.  Moreover, the problem is often left unattended and becomes nobody’s problem as every department would say they do not have sufficient power to handle it.  And where more than one department can actually solve the problem without help from others, the responsibility for solving the problem is seen as belonging to others who are in a better position to tackle it.”

She noted that in such circumstances, public complaints would grow and the problems become even more unwieldy.  By the time the departments/organisations concerned eventually decide to introduce major changes, or agree to work together to solve the problems, the slow pace of action means that huge costs would have been incurred.  That would not only affect the image of the organisations, but the protracted problems would also cause significant wastage of resources.  The Ombudsman urged the organisations concerned to take prompt actions on discovery of administrative problems and make improvements as soon as possible.

In year 2015/16 (April 2015 – March 2016), the Office concluded a total of 53 cases that involved the Code on Access to Information.  Of those cases concluded, failings on the part of the organisations concerned were found in 27 cases, with 11 cases involving unjustifiable refusal, wholly or partly, or imposing unnecessary conditions for provision of the information requested.

Ms Lau said, “Our investigation has revealed that the most frequently misused reasons for refusal to provide information remained to be ‘where disclosure could be misleading’ and ‘third party information’.  Quite a number of cases involved delay in responding to requests for information.  To enhance Government departments’ understanding of the meaning and requirements of the Code and to help the public understand better their right to information held by the Government, we have introduced a new section on our website to publish in concise format summaries of some Code-related complaint cases to illustrate the results of our investigation.”

Last year, 134 cases were concluded by mediation.  More departments and organisations participated in resolving complaints by mediation and a total of 21 departments/organisations actually took part.  For example, the Water Supplies Department and the Hong Kong Housing Society did not participate in mediation in 2014/15, but they had seven and five successfully mediated cases respectively last year.  In terms of nature of complaint, most of the cases settled concerned complaints about delay/inaction, followed by complaints about errors or wrong advice/decisions and lack of response or reply to complainant.  The average processing time was about 19 days, with over 80% of the cases completed within one month.

On successful conclusion of cases by mediation, the Office sent out questionnaires to the participating parties to obtain their feedback on the process.  Almost all who had returned the questionnaire expressed appreciation of the speed with which the dispute was resolved and the performance of the Office’s staff as mediator.  (For details of mediation cases and the relevant figures, please refer to Annual Report 2016.)

The issues examined in the eight direct investigations which the Office completed included the Rating and Valuation Department’s regulation of display of building numbers; the Government’s regulation of fire safety measures for New Territories Exempted Houses; the Water Supplies Department’s mechanism for handling leaks of private water pipes; the Government’s management of permitted burial grounds; method of calculation of waiting time for public rental housing and release of information; the Government’s implementation of strengthened control of exhaust emissions from petrol and LPG vehicles; problems relating to enforcement of the Fire Safety Building Ordinance; and the Home Affairs Department’s management of booking and use of facilities of community halls and community centres.

On completion of the full investigations and direct investigations, The Ombudsman made a total of 277 recommendations.  As at March 31, 2016, 236 recommendations (85.2%) have been accepted by the organisations for implementation while 41 (14.8%) were under consideration.

On the work of the Office in the year ahead, Ms Lau said, “We shall continue with our endeavours in enhancing the effectiveness of our investigation in different aspects and shall remain committed to promoting mediation for even better achievements and improvement in public administration.  Meanwhile, we shall enhance the transparency of our direct investigation, provide possible solutions and actively promote our values and functions through different promotional strategies and publicity channels so that all sectors of the community will understand better the work of this Office.”

Full text of the Annual Report can be viewed or downloaded from the Office of The Ombudsman website at www.ombudsman.hk. 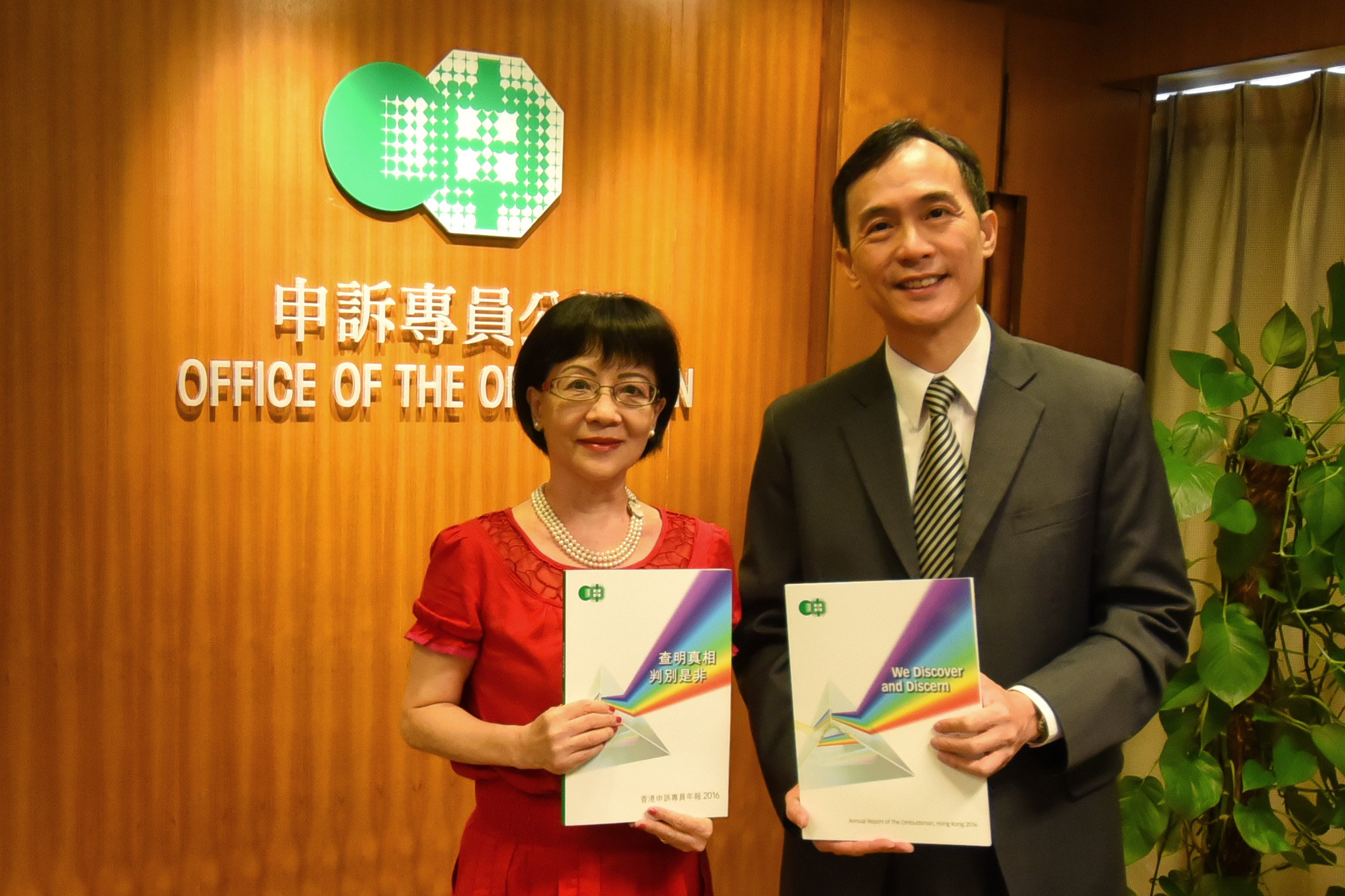