The Ombudsman, Ms Connie Lau, today (June 11) announced the completion of a direct investigation into the mechanism for following up cases of unregistered birth by the Immigration Department (ImmD). The investigation report has been uploaded to the Office of The Ombudsman website at www.ombudsman.hkfor public viewing.

A tragedy happened in Hong Kong in which a 15-year-old girl plunged to her death from a building. It was later discovered that the girl and her younger sister were born in Hong Kong, but their parents had never registered their births. In view of the public outcry arising from the incident, the Office decided to launch this direct investigation.

The Office’s investigation found that prior to the tragic incident, ImmD’s follow-up actions on cases of unregistered birth were feeble and ineffective. The department only sent out reminders in a routine manner to alert the parents concerned but never referred such cases to its Investigation Division, let alone instituted any prosecution. The situation was extremely undesirable as the follow-up procedure under ImmD’s old mechanism was tantamount to inaction. In the wake of the tragedy, ImmD immediately reviewed its practice and introduced a new follow-up mechanism. Nevertheless, upon examination, the Office found that there is still room for further improvement. In particular, the cases often involve complicated family problems and call for the department’s early intervention.

In this light, the Office made four recommendations to ImmD for improvement:

(1) to collaborate with hospitals to solve the problem of incomplete address on birth returns;

(2) to initiate early intervention in cases of unregistered births;

(3) to enhance its public education campaign; and

(4) to examine possible ways to strengthen the existing follow-up mechanism, including the feasibility of establishing a mandatory notification mechanism.

The department has accepted all the recommendations and implemented some already. 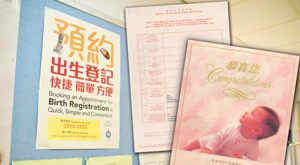